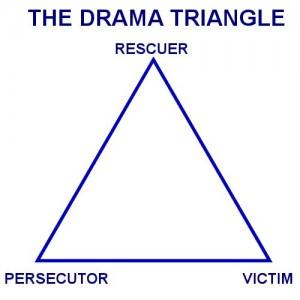 The Drama Triangle was a concept invented in the 1960s by Dr. Stephan Karpman, to describe in the simplest possible terms the screwed-up psychological roles that people play in habitual, dysfunctional relationships.

The three roles are: Victim, Persecutor, and Rescuer.

We each tend to fall into one of those three roles habitually. (Nice to meet you, everyone! My name is Liz Gilbert and I’m a Professional Rescuer!) And when we haven’t done the necessary work in our lives to deal with our unresolved emotional pain and issues, we turn these three roles into high drama, emotional dysfunction, cycles of destruction, or even violence.

Ah…but that’s not all! The real fun begins when the three people (or families, or entities) trapped in that Drama Triangle get so enmeshed and entangled that they end up switching roles — such that the Victim becomes the Persecutor (manipulating, punishing, and aggressively accusing everyone of not helping him or her enough), and the Rescuer becomes the Victim (under constant attack, torn to pieces, saying things like, “After all I’ve done for you, how can you treat me so terribly?”) and so forth…

Thus The Drama Triangle becomes a never-ending Cycle of Doom.

I’ve been reading up on this subject all day, and recognizing so many dramas from my own history in these behaviors. I can see so many times where I heightened trouble and even invented (or sought out) drama, becuase of my unresolved emotional pain.

Repetition is the real problem here.

For chronic Rescuers, no matter how sincere our intentions may be (we just want to help!) the end results are usually pretty dreadful. For habitual Victims, no matter how deeply we may feel utterly helpless, certain that we desperately need to be saved, it doesn’t work. (We can never be saved by an outsider — because true salvation can only come from within.) For serial Persecutors, of course, life always sucks, because you’re essentially an emotional vampire — preying on the wekaness of others, which is the most toxic manner of living imaginable.

All of it leads to staggering amounts of suffering and resentment and misery.

In other words, The Drama Triangle sucks for everyone involved.

And so much of it is unnecessary! It’s practically all self-invented. My favorite line about The Drama Triangle came from an analyst who said, “The victim is not really as helpless as he feels, the Rescuer is not really helping, and the Persecutor does not really have a valid complaint.”

Nonetheless, we keep doing it. We will repeat these patterns until we stop repeating them.

But none of it WORKS. All it does is bring sorrow.

Until we don’t do it anymore.

How do you not do it anymore?

Well…a nice start is to check out this website below, made by a guy named David Emerald, who has some really smart and helpful information about breaking these life-destroying behaviors, and stepping into a stronger, saner, and healthier ways of behaving:

(Watch the video on the home page: It’s excellent. And really dig through the website — there’s gold there.)

And then: get serious about honesty. Time to face up to heaps and heaps and heaps of honesty about yourself, and about others, as well…and maybe some invest in some therapy or counseling or life-coaching, to deal with the really sticky habits.

But it’s important — at least — to see how these destructive patterns evolve, and to try to be super honest about how we play into all the drama. That’s why the triangle image is so useful, because it’s so simple.

View all posts by Kitty Norris →

why we walk the path of the wounded healer . . .
Our Search for the Truth

Learn about coaching and clearing for friends, family, and those preparing to cross over, in the format of the DyingConsciously.org shamanic hospice. Learn more . . .